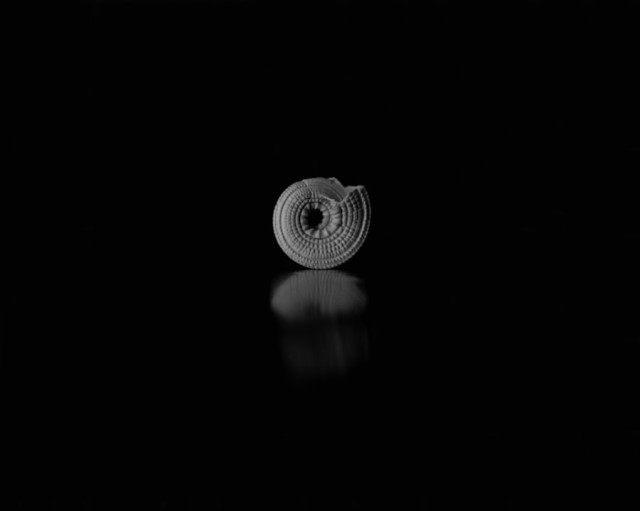 Michael Alpert was born in Bangor, Maine, in 1945. He received a B. A. from the New School for Social Research (1968) and a M. L. S. degree from the University of Maine (1972). Alpert has worked for most of his adult life as a writer, publisher, and visual artist. In 1979, under the imprint Theodore Press/ Sarah Books, he began to publish letterpress books with significant texts and artist’s books that focus on the structural / visual side of book-arts. Alpert has also been the occasional designer and production manager for books published by Stephen King’s Philtrum Press. Alpert oversaw the 1997 production of Stephen King’s The Plant, the first e-book published on the Internet by a major author. Awards granted to Alpert’s publications include the Stephen Harvard Prize for Excellence in the Book Arts, presented by the Baxter Society in 1990 (for a Theodore Press/ Sarah Books edition of Gluck’s Orfeo ed Euridice) and First Prize for Book Publications from the New England Museum Association in 2005 (for A Maine Portfolio, published by the Center for Maine Contemporary Art). Since 1995, Alpert has been employed as Director of the University of Maine Press. A collection of Alpert’s personal writing, titled A Night-sea Journey, was published by Constance Hunting in 2000.

In the late 1990s, Alpert shifted his primary artistic attention from book-arts to photography, after decades of interest in photography as an art-form. Since 2001, Alpert’s photographs have been exhibited in nine one-person shows. Based in Bangor, Alpert continues to work as a publisher, author, and visual artist.

“Life-Form Studies” might be a more accurate name for this series, for all the photographs in it are portraits of invertebrate fossils from the American South. Still, “Life Studies” also seems to fit: Although my subjects have long been dead as individuals (and many have long been extinct as species), my overarching goal is to study Life.

Like the sixteenth-century Mannerist painter known as Parmigianino (as envisioned in John Ashbery’s poem “Self-Portrait in a Convex Mirror”), I wish to “rule out the extraneous / Forever.” Through narrowly delineated compositional means (influenced by Parmigianino’s youthful panel), my photographs depict the extraordinarily beautiful shells of ancient mollusks as they have fared in their travels through time.

My intention, however, is not simply to document objects. Art is often a mirror (convex, or otherwise), and making art is often an act of veiled self-portraiture. With this in mind, as I continue to work on this collection of images, I am also exploring the qualities and limitations of perception, the location and circumference of empathy. 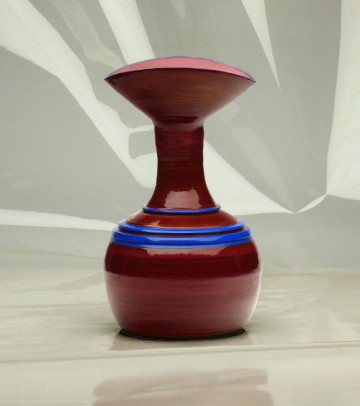 Jemma Gascoine, born in 1973 in Surrey, UK has been creating and selling her ceramic sculpture and her utilitarian work since 2001, when she moved from London, England, to a village on the Piscataquis River in the North Woods of Maine.

In 1999, she began studying with Barry Guppy in London, after her workday at the Arts Council of England. Guppy had taught alongside Lucie Rie and Hans Coper at Camberwell College of Arts. The tactility of clay and the movement and physicality of throwing on a potter’s wheel are what drew Gascoine to pottery initially.

Gascoine strives in her functional wheel-based work for beauty of form and feel. The work helps her to hone the skills she needs to build her sculptural pieces. She creates these works using altered, augmented, and adapted wheel-thrown parts.

Gascoine’s 2012 solo exhibition at the University of Maine Museum of Art entitled ‘SlabWaltz’ highlighted her dance in the studio between deconstructed and bisected thrown vessels, mounted on fifteen-inch tiles. These bas-relief sculptures were hung on the walls of the gallery, while Gascoine’s three-dimensional pieces were displayed on podiums. The forms and motifs of the three-dimensional work were echoed in the wall-based work. This ‘echoing’ created a tension that alluded to the age-old dialog between ‘art’ and ‘craft’.

Gascoine’s work can be seen at her studio/gallery in Blanchard Township, at the Center for Maine Craft in West Gardiner, and the North Light Gallery in Millinocket. The many shows that she has participated in are listed on her website.

I build my utilitarian work with stoneware thrown on a potter’s wheel, which I then adapt, alter or augment. I make models in preparation for my sculptural work. They help me refine my ideas. My sculptural work is often a nontraditional reconfiguring of my functional work in a way that I find arresting. Over time I am creating a repertoire of signature motifs that I reuse.

I am firmly in the realm of contemporary art. Weight, feel and texture is important but form is fundamental. I use color to reinforce the statement I’m making with form. My work is a studied exploration towards a style, mood or theme that I am trying to convey, towards what I am curious about or towards what I find beautiful. 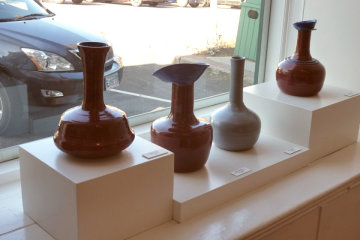 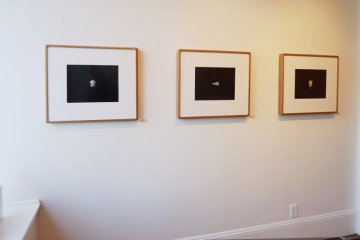 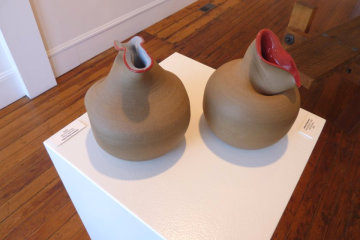 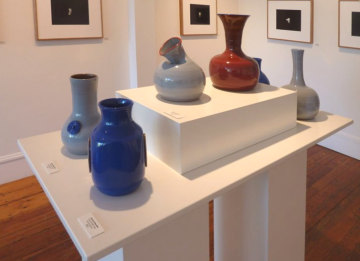 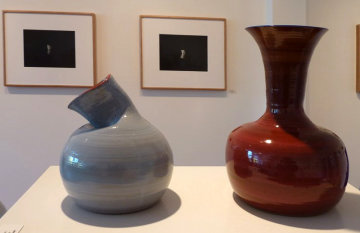 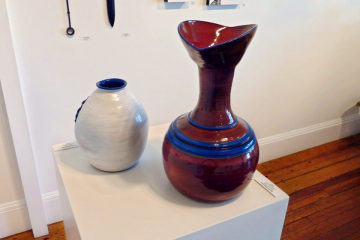 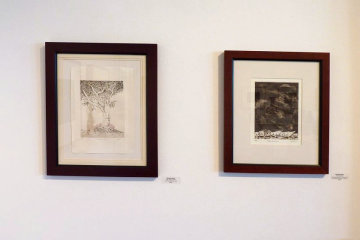 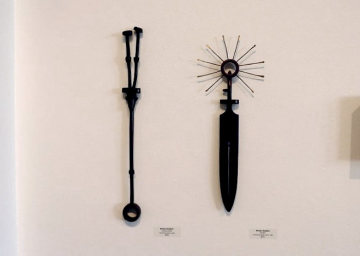 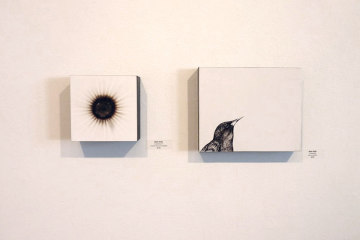 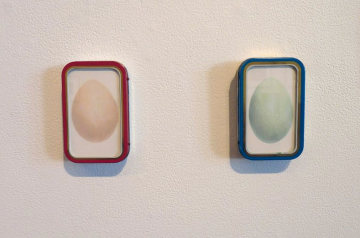 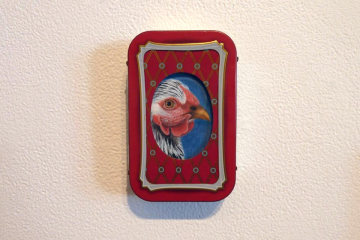 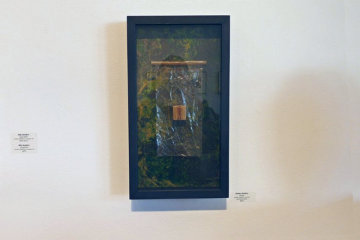 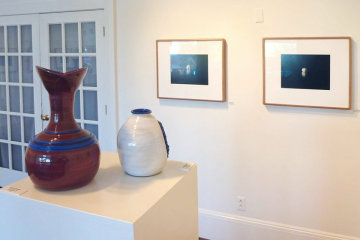 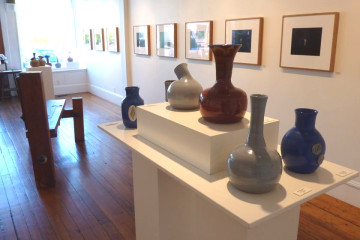 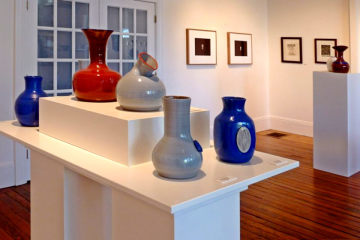